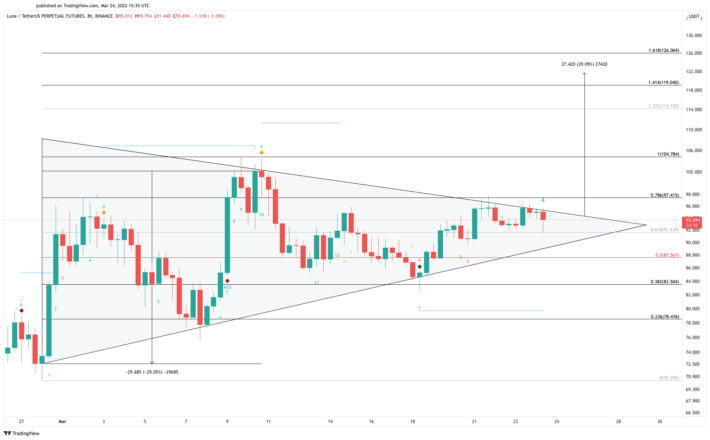 The Luna Foundation Guard (LFG) recently announced plans to accumulate billions of dollars worth of Bitcoin to stabilize UST. Terra’s LUNA now looks primed for new highs, but it must overcome a critical resistance level.

Terra’s LUNA Prepares to Break Out:

LUNA is currently trading at $ 94.29 and has enjoyed a rise during the recent market surge. It’s up roughly 5.9% this week.

Terra has been in the crypto spotlight for several weeks now, thanks in part to developments surrounding the Luna Foundation Guard (LFG) and Terraforms Labs CEO Do Kwon. The Korean entrepreneur this week outlined plans to increase LFG’s Bitcoin reserves to $ 3 billion, with a long-term view to building a $ 10 billion fund.

“It’s not 10B today – as UST money supply grows a portion of the seigniorage will go to build BTC reserves bridged to the Terra chain. We have 3B funds ready to seed this reserve, but technical infrastructure (bridges etc) is still not ready yet, “Kwon tweeted, after announcing that LFG’s Bitcoin reserve would” open a new monetary era of the Bitcoin standard. “

P2P electronic cash that is easier to spend and more attractive to hold: #btc:

LFG has put in motion a: plan: to build a reserve fund that will “provide deep liquidity at a discount when the UST peg is under pressure.” The pool’s primary goal is to act as a defense mechanism during a crisis and to remain programmable for new features to be added in the future.

UST is Terra’s flagship stablecoin. Terra uses a dual token mechanism to keep UST pegged to the dollar. To mint UST, Terra users must burn LUNA, and vice versa. As UST is an algorithmic stablecoin, it runs the risk of experiencing a “death spiral” if it does not have sufficient collateral backing it (UST has briefly lost its peg when LUNA has crashed in the past). That’s why LFG has started accumulating Bitcoin in its reserve fund.

To date, the nonprofit organization has already raised $ 2.2 billion for its reserve. Roughly 45% of the funds were collected through over-the-counter sales of LUNA and the rest by selling UST for Tether’s USDT.

Terra has faced criticism for its algorithmic stablecoin design, particularly in recent weeks as LUNA has outperformed other tokens in the market. However, its detractors have done little to quell Kwon’s confidence in Terra’s potential. He has such high conviction in his project that he placed two bets worth $ 1 million and $ 10 million on Mar. 14 that LUNA would hold above its current price on a one-year timeframe. Kwon made the bet when LUNA traded at $ 88; it will need to trade higher for him to win the bet when it closes on Mar. 14, 2023.

Although market participants welcomed the recent developments surrounding Terra, LUNA continues to consolidate within a tight price range. The token appears to be stuck in a symmetrical triangle that has been forming on its eight-hour chart since late February. The consolidation pattern estimates a candlestick close above $ 97.50 could catapult prices toward a new all-time high of $ 122.

LUNA has found support at $ 87.50. It must continue to trade above this level to validate the optimistic outlook. Failing to do so could generate panic among investors and encourage them to sell their holdings to avoid further losses. Increased selling pressure could then push prices toward the next critical support level at $ 83.50 or even $ 78.50 — which would be bad news for Kwon if it fails to pick up.

Disclosure: At the time of writing, the authors of this piece owned BTC and ETH.

We’re doing this because we want to be better at picking advertisers for Cryptobriefing.com and explaining to them, “Who are our visitors? What do they care about? ” Answer our questions …

Terra’s Founder Is Betting Millions on LUNA Holding Its Highs:

What Is Terra? The Blockchain for Stablecoins Explained:

Terra is a smart blockchain contract that aims to provide an ecosystem for algorithmically governed, seigniorage-based, fiat-pegged stablecoins in a decentralized manner. Terra Unpacked Terra is a blockchain protocol and …

Terra’s native token LUNA has suffered a minor correction over the last few days after outperforming much of the crypto market. Now, it appears that the digital asset has found …

Crypto Traders Are Flocking to DeFi After FTX Exchange Implosion

Dogecoin Is Up 134% This Week. Can the Top Meme Coin Head Higher?