Bitcoin’s Network Activity Is Soaring. What Comes Next? 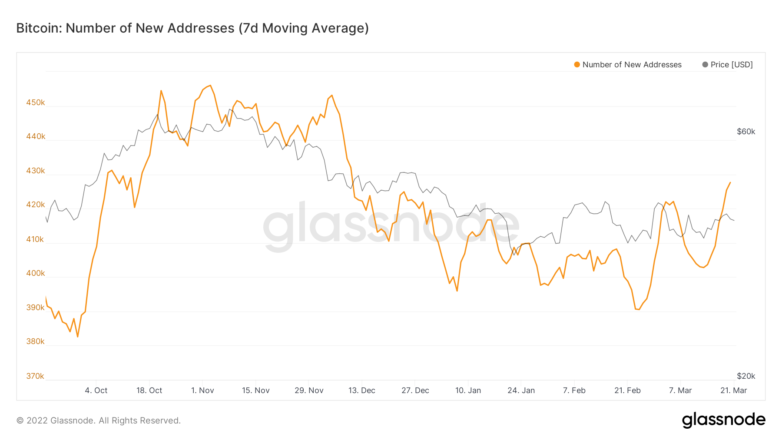 Several on-chain metrics suggest that Bitcoin is gaining strength for a significant bullish impulse. Still, the top crypto has a big hurdle to overcome first.

Although prices have retraced by roughly 5% in the last 48 hours, Bitcoin’s uptrend appears to be gaining strength.

The number of new addresses joining the Bitcoin network has significantly increased since Feb. 21, making a series of higher highs and higher lows. The uptrend in this on-chain metric suggests growing interest from sidelined investors who appear to be re-entering the market.

More than 480,000 Bitcoin addresses were created in Mar. 17 alone, which is a strong positive signal for further upward price action.

Network growth is often considered one of the most accurate price predictors for cryptocurrencies. A steady uptrend in the number of new addresses created on a given blockchain often leads to rising prices over time.

A similar uptrend can be seen in the futures markets, where the number of open positions, including both long and short positions, has been steadily rising since Mar. 7. As open interest increases, it indicates more liquidity, volatility, and attention is coming into the derivatives markets. A continuous increase in open interest to surpass 12.36 million could support Bitcoin’s recent price increase.

Still, transaction history shows that Bitcoin has one substantial resistance wall to break to be able to advance further.

IntoTheBlock’s In / Out of the Money Around Price model reveals that 1.57 million addresses have previously purchased nearly 760,000 BTC between $ 40,900 and $ 42,100. A decisive daily candlestick close above this hurdle could give Bitcoin the strength to break the next critical barrier, which is sitting at $ 46,500.

The IOMAP also shows that the top-ranked cryptocurrency is holding above stable support as over 1 million addresses have previously purchased 1.23 million BTC at an average price of $ 40,300. As long as Bitcoin remains trading above this foothold, it has a chance at advancing further. However, failing to do so could result in a downswing to $ 37,500.

Disclosure: At the time of writing, the author of this piece owned BTC and ETH.

NFT Express: Your on-ramp to the world of NFTs:

At Tatum, we’ve already made it super easy to create your own NFTs on multiple blockchains without having to learn Solidity or create your own smart contracts. Anyone can deploy …

Bitcoin appears to be preparing for a bullish impulse as on-chain metrics show signs of increasing demand and little to no resistance ahead. Bitcoin Has the Potential to Surge Bitcoin …

Wasabi, a Bitcoin-only wallet with one of the most popular transaction mixing implementations, has announced that it will start censoring certain transactions to its CoinJoin mixer. Wasabi’s CoinJoin to Start …

Crypto Traders Are Flocking to DeFi After FTX Exchange Implosion

Dogecoin Is Up 134% This Week. Can the Top Meme Coin Head Higher?