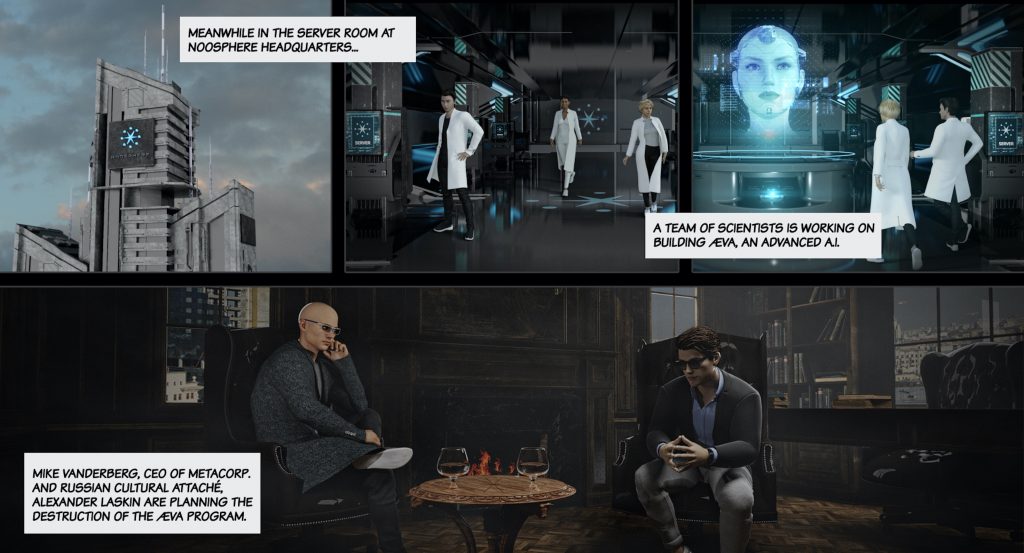 Looking for a different type of puzzle game? Quantum Noesis is a game that’s part graphic novel, part puzzle game, unlocks episodically over the weeks and features prizes for those who are fast enough to solve them first and – of course – it’s powered by NFTs and has its own unique token economics and behind -the-scenes AI enterprise.

It’s a sci-fi tale of AI and cybercrime, as the player fights an evil Megacorp hell bent on thwarting an essential AI breakthrough that will save the world… And while the NFT tech and currency in the game is purely 2022 and beyond, the game itself looks to all the world like a classic graphic novel.

Quantum Noesis takes place in the year 2035. The Noosphere DAO is on the verge of an astonishing breakthrough in Artificial Intelligence. EVI (Electronic Virtual Intelligence) holds the key to humanity’s future. But there are powerful forces at work to destroy her…

Your ticket to entry is one of Synesis One’s Kanon NFTs – part of their much larger AI natural language project that – in the future – will earn holders cash as the system is used to power AI chat for big companies… For real. But for now your NFT is your ticket into the game – kind of a reward for investors, inspired by the AI ​​themes and end product that the Synesis One team are working towards.

We spoke to Tracy Spaight, the game’s Producer to find out more.

FIrstly, tell us a bit about yourself:

“I’ve been in the games industry for 20 years and was director of publishing at K2 Network and we were one of the first free-to-play publishers in the west. In fact, we had the trademark on ‘free to play’. We were taking games mostly from South Korea and taking them to places like North America, Turkey, and Brazil.

“These days the entire world is free to play, or the holdouts have bolted on a cash shop for microtransactions for their worlds.

“The larger companies are very tepidly dipping their toe into the pool to look at it, but they do not understand that you need to look at it from a different perspective. You’re building a player-run economy and your player base is going to basically direct the long term vision and its health and vitality and participate in the value creation that’s happening.

“That mindset is very uncommon in existing publishers. They’re just not familiar with blockchain as a technology or the DeFi space in general.

“I think the flipside is true too – a lot of people in crypto do not know how to make a good game. So it’s rare to find skillsets that know that games need to be fun and engaging and understand crypto and the rest of it. I did a masters degree in blockchain and digital currencies and I think this is the next thing that will define the gaming space. ”

It’s great to see the return of the graphic novel. It’s a great format for telling a story.

“Yes, we in the west are maybe unaware of how massive the graphic novel format is in Asia. Anime, manga, and the Korean variant which is a $ 10billion industry there. You see it everywhere and increasingly it’s digital so people are reading on mobile devices and PC.

How do we get started in the game?

You go to the webpage – quantumnoesis.io – and you click ‘Play Now’. Ideally you’d be playing in the Chrome browser or the Brave browser and using a Phantom wallet. If you have a Kanon NFT then you can stake that and jump right in, but you can also use our SNS tokens. So you can stake less, but your rewards would be proportionally smaller.

“Your Kanon NFT functions like a movie ticket – it gets you in so that you can play the game. You just have to have one in your Solana compatible wallet. If you have it as a Chrome extension it pops up right there and you just say ‘yeah, approve’.

“The game is in Unity so you’ll be in the prologue and introductions then you’re into Chapter One which contains your first three puzzle challenges.”

“It’s a bit of a race. The first person to solve the puzzles gets a bigger reward. A lot of players will win around 600 to 800 SNS when they play, very good players several thousand and top players substantially more, including our grand prize of 50,000 SNS for the first person to finish the game ”

Almost all of them are word-based puzzles and they were designed by legendary puzzle master Cliff Johnson. Cliff comes up with indescribable, category defying word puzzles, the likes of which you’ve never seen.

“The story advances and you come to puzzle and there’s a character in the game Piler – short for compiler – who’s your sidekick and she takes underlying problems in the game’s ‘codeblock’ and turns them into audio and visual puzzles that the human mind can grasp .

“The idea is that human intuition and creativity and pattern recognition are still better than machines. So the ingame Noesis network gamified the security for this advanced AI and you’re there as an elite gamer to try to keep the system safe from the evil Megacorp, ran by Mike Vanderberg whose similarities to any other head of a social media network are purely co-incidental…

“It’s up to you, the player, to thwart their evil plans and save the world.”

How does the game work?

“We’re calling it ‘solve to earn’. If you can solve the 36 complex puzzles that we’ve built into this graphic adventure then you win SNS tokens – the Synesis token – as rewards as you go.

“Our community has access to a very cool cyberpunk novel with very cool illustrations and puzzles where they can win SNS prizes. As soon as you solve a puzzle it talks to the Solana blockchain and puts your prize directly into your Phantom wallet.

“There are 12 chapters and there are three puzzles at the end of every chapter. We made lots of iterations of each type of puzzle, depending on the background fiction that’s happening, so what’s most appropriate.

“It’s a bit of a race. The first person to solve the puzzles gets a bigger reward. A lot of players will win around 600 to 800 SNS when they play, very good players several thousand and top players substantially more, including our grand prize of 50,000 SNS for the first person to finish the game. There are a million tokens we’re giving away.

“The final Alpha / Omega puzzle will blow your mind. I’ve never seen anything like it.

“Right now I’m watching our players move through the game. We’re releasing the chapters at the rate of one a week because we didn’t want one ‘super puzzle solver’ to solve everything over a weekend and that’s it. “

Who wrote the story?

“It’s written by DL Young, who wrote the Cyberpunk City novels which I love and we worked with a Ukrainian art team that developed 300 panels of art for the game. They kept working right through the Russian invasion… Between Covid and the war finishing this game was uniquely challenging!

“The game is conceived as a contest and reward for the folks that bought our Kanon NFT. The fact that this game could exist and they could play it drove some of the buying behavior that acquired our Kanon NFTs.

“They’re quite cool if you haven’t seen them. We worked with a New York art collective called Rare Volume to design these really interesting procedurally generated AI art that you can zoom way into to see the details. We’ve sold several thousand already and we’ll be selling more as we get later into the year. ”

One thing… Couldn’t the answers to the puzzles simply be shared online?

“Some puzzles, you could tell someone how you did it… But others, there are so many moves… They require a lot of experimentation and creativity to solve. They’re kind of impossible to tell anyone the answer and how you actually did it… Some are based on cyphers… Moving parts of words around… They’re pretty unique and interesting. People who are familiar with Cliff’s puzzles will love this. “

So how hard are they? We’re imagining something a little tougher than Wordle?

“Well, yes… Some you could solve in 15 minutes. Some will take over an hour. You will figure it out… But it will bake your noodle for sure! ”

It all adds up to an intriguing new spin on both the graphic novel and puzzle genre with a little NFT magic and a bigger real-world AI quest behind the scenes. Find out more about the work being done by Synesis One here.

And head to quantumnoesis.io to play the game.