The Bored Ape NFT craze is all about ego and money, not art |: Art and design: 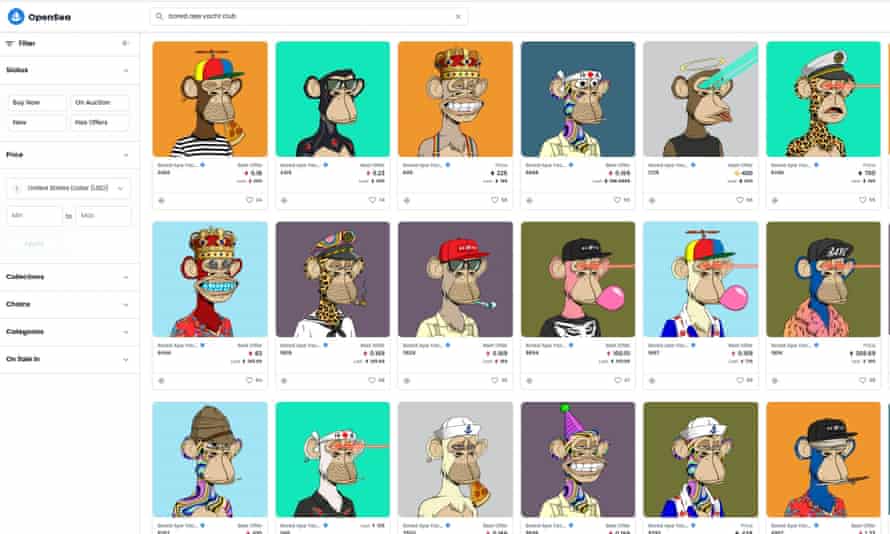 Bored Ape # 79 looks almost as bored as I feel when I think about NFTs (non-fungible tokens) and their supposedly seismic impact on art. My jaw slides, my eyelids hang down and I want to pick lice from my fur.

Even though I can identify with Bored Ape # 79, I won’t be buying it, unlike Eminem who has bought another in this highly fashionable NFT “art” brand that looks slightly like him. It’s called EminApe and sports a military-urban peaked cap above its enervated face. He reportedly paid around $ 450,000 (£ 334,000) for it.

Just in case, like me, you have spent the last year averting your gaze with a sigh whenever another news item about NFT art wafted an unmistakable aroma of bull your way, here is a quick reminder of what Eminem gets for his near half-million – which, by the way, is far from the highest anyone has paid for one of these nihilist monkeys. He owns a unique unit of data recorded in a digital blockchain, which permanently records its provenance or sales history. It’s a way of restoring the idea of ​​an “original” one-off artwork to the endlessly reproducible, copyable realm of the internet. Anyone can grab Eminem’s ape image online, but he owns the “original” and has the blockchain provenance to prove it.

Someone was going to monetize digital culture eventually. And theoretically, from an artist’s point of view, that has to be a good thing – right? Suddenly, creators do not have to settle for feeble fees from Spotify or see their images circulate free of charge. They can clean up. Rags to riches stories have helped to make the NFT art market the sentimental bag of air it is. Struggling unknowns find themselves selling NFTs for wildly escalating prices, outsiders who never got near success in the established art world suddenly leap to fame, and the art world, never slow to jump on a bandwagon, has joined in the fun with Christie’s selling a JPEG file by Beeple for $ 69m last spring.

The Bored Ape boom, however, should put an end to any romanticism about NFT art. It puts the consumer experience first and has absolutely nothing to do with empowering artists. It’s all about the collector’s ego.

For Eminem doesn’t just get a “unique” masterpiece of digital “art” for his money. Purchasers of an NFT from the Bored Ape collection also become members of the Bored Ape Yacht Club, a “swamp club for apes” where the cool dudes who fork out heaps of cryptocurrency for a monkey cartoon can hang out together. This is part of the well-planned strategy that is making Bored Apes a marketing sensation – and a mockery of all the inflated claims uncritically spouted about NFT art.

The Bored Ape Yacht Club could even be a satire on the NFT craze, were it not such a lucrative example of it. This is a totally cynical creation. The Club offers a new level of exclusivity, a virtual social club, on top of its promise of exclusive digital ownership. It seems the kind of fake cool meeting of pop culture and money that might attract the insecure Kendall Roy in the TV drama Succession – “Bored Apes are cool, right? Yeah they’re cool. See you in the Yacht Club to dish out more stuff on my dad! ” Yet real-life celebrities are queuing up to join including Jimmy Fallon and rapper Post Malone. If they get bored posting graffiti in the club toilet (this is one of the perks) they can purchase a “serum” that allows them to remix ape designs to produce a Mutant Ape.

It’s all so neatly designed, so smoothly negotiable, so stylishly moronic, it makes the early (as in, early 2021) NFT art sensations look frightfully naive. The anonymous inventors of the Bored Ape were two literary loafers – they claim to have bonded over the novels of David Foster Wallace – who then hired a graphic designer to create the ape design. The Bored Apes are framed as portraits in an ironic nod to high art. But they’re not art of any bite or originality. The ape is a very ordinary and derivative bit of comic book design, heavily indebted to inspirations ranging from Jamie Hewlett to Rick and Morty.

It isn’t art that’s being sold here but attitude. The attitude says it all. Bored, emptied out, wrecked, and proud of it. That’s how the NFT art investors all feel, apparently. And so they should. NFTs are not good for art. They are not liberating for artists. Instead, as the Bored Ape Yacht Club makes horribly obvious, they serve nothing but money. They are just simian poker chips that celebrate the thrill of the market. A purer form of capitalism has never existed.