‘Painting is like a cockroach or a shark, perfectly evolved’: artist Seth Price |: Painting: 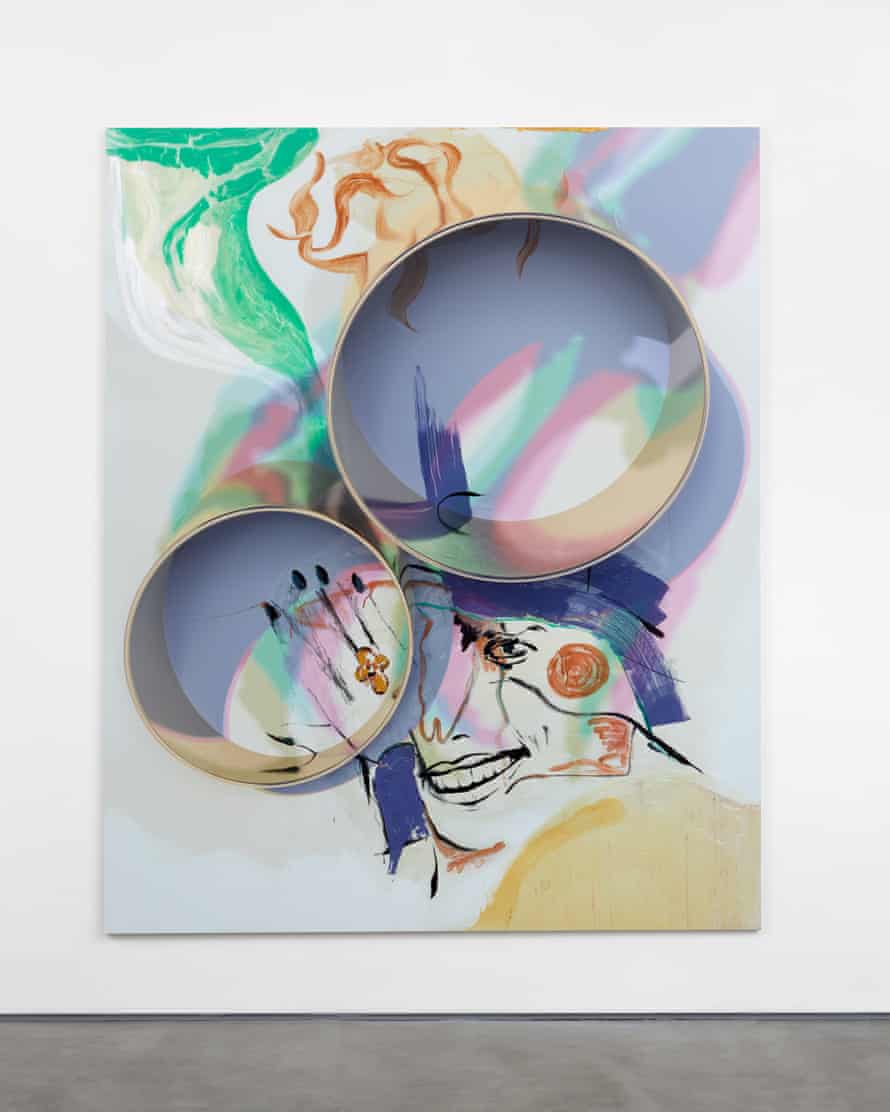 Seth Price is slippy. Since the 1990s the artist has been producing genre-defying works that cross film with technology, photography with archeology, sculpture, map-making and even zoology – all while making music and writing memoirs and fiction. Now, as tech is the mainstream movement in art, he’s opening his first show of paintings. Well, sort of.

“My work often falls between the cracks of categories,” Price says. “It used to worry me, but now I think it saved me.”

The sign on his studio door next to a taxi repair shop in an anonymous block in Queens, New York reads Seth Price LLC and looks like it could belong to an accountancy firm. Inside, the studio is quite bare. His latest work has been packed up and shipped for his first show since the pandemic and his first gallery show in London.

Loping around his studio, Price, a lanky and handsome 48, says he has always been interested in painting but until recently could not make it work for him. In part, he says, his interest grew from the reaction to a series of lightboxes he made a few years ago.

Those pieces were made using thousands of high-resolution scans of human skin – and in one case a squid he bought in Chinatown. The scientific camera tool that took the pictures treated the photographs like an archaeological dig and generated 400,000 photographs that were stitched together with map-making technology and printed on fabric. But in the end, you had a “photograph of a human by another human using a camera”, he says.

Price says he thought he was contributing something to photography but a lot of people saw it as an installation or a lightbox. “I think that was partly why I felt that it might be interesting to make things that were indisputably paintings. Partly, because I think that you are not required to explain your intent and meaning with painting. People are fine with just accepting it. People have a lot of visual intelligence for painting that they might not have for an installation. ”

He adds: “They are OK looking at painting from the 19th century and being aware there is a lot of buried meaning that they do not quite get. They are OK with saying ‘I enjoyed this, I liked this area of ​​paint handling, I like the scene’ even the idea that there is meaning, and even though they do not know what it is. There is a very sophisticated play between knowing and not knowing. But they are not as comfortable bringing that to other forms of work. ”

The London show is titled Art Is Not Human and fuses Price’s continuing interest in technology to more traditional painting techniques. The pieces were made with gels and paints, poured, brushed and smeared with fingers and then loaded on to Price’s computer where they collided with 3D images that reflect the techniques of his gestural painting – when the paint is applied with bold, sweeping gestures.

“I think it ends up making a very strange, uncanny meeting of gestural painting and the space of the machine,” says Price.

The software program Price uses – Cinema 4D – is the same one that the digital artist Mike Winkelmann, AKA Beeple, uses to create his dizzyingly huge output of nuance-free surrealism, an output that landed Winkelmann a $ 70m payday at an auction at Christie’s last year and helped cement thenon-fungible token (NFT) as the art world hottest trend.

Price’s new works could not be more different. He said he wanted to avoid “surrealism and narrativity because 3D usually wanders into that”. Not that he is being deliberately contrarian. Price remains deeply interested in technology and sees NFTs as an exciting development that opens up new possibilities for paying artists – in art, music and writing – by giving people new ways of sharing. After the disappointments of social media, “these blockchain technologies offer a way of rethinking what a platform is and who it benefits”, said Price. “Artists will do something really cool with it. As usual, 90% of it will not be very interesting but that’s not out of the ordinary. ”

And while he thinks about the possibilities of new technologies, there is life yet in the old ones. Price is currently working on an essay / fiction / memoir piece for online arts magazine Heavy Traffic which will be – theme alert – printed, and he’s also updating his ever-evolving art history / experimental film Dispersion. The old never fully replaces the new, he argues, it just gets absorbed.

“All the old technologies are still great. Photography did not replace painting, things just keep getting folded in, ”he said. He hands me a cassette of his music as we leave (I’ll have to find my old Walkman). His gen-Z daughter just asked him to get him all of Taylor Swift – on CD.

“Maybe there was a blip when people thought or dreamed or were afraid that: [physical] product was going away but actually we are going back to the realization that we love it too much. Books never went away, instead it was just augmented by this other way of reading. Maybe there was one generation that was told objects were in the past but the generations above and below were like: ‘What are you talking about?’ ”

And with that, we are back to painting.

“Painting is like a historically perfectly evolved art form,” Price said. “It’s like the way a cockroach or a shark is perfectly evolved. Of course, it continues to evolve but the hanging, two-dimensional object bounded by a frame can go on forever because it’s so fucking good. ”