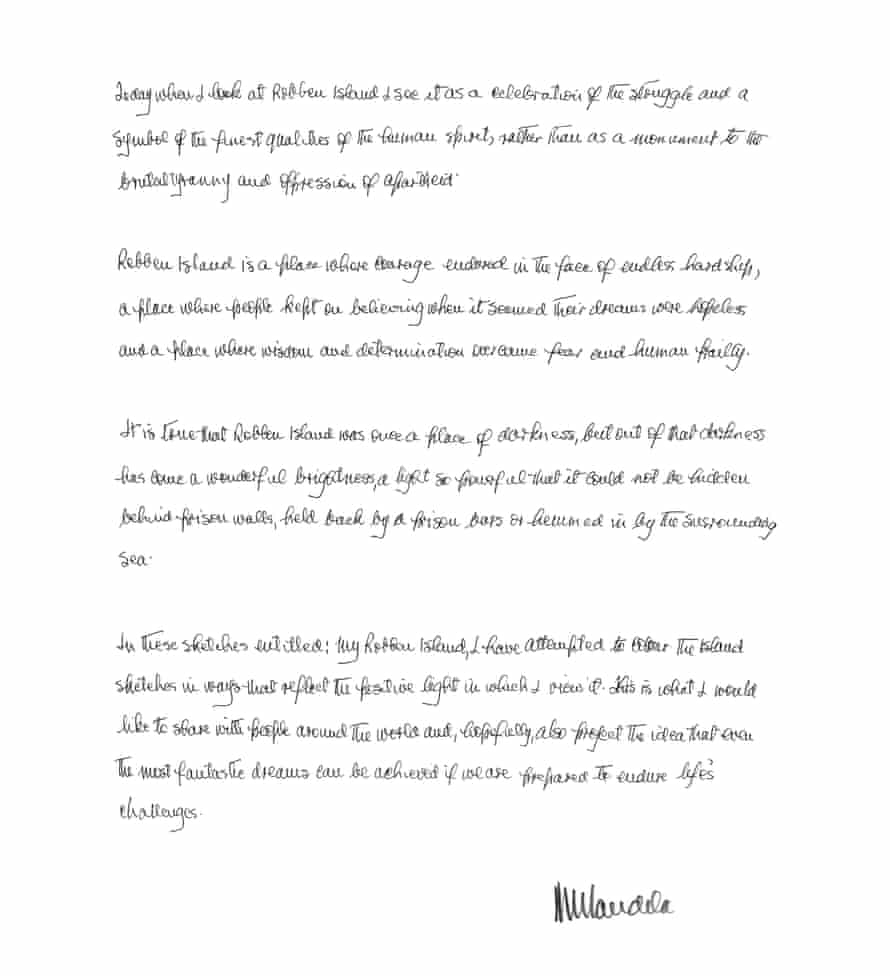 The contrast between the tiny austere cell on Robben Island, where Nelson Mandela spent 18 of his 27 years in jail, and the infinite diversity of the digital world could not be greater.

But the two will come together next month when the first non-fungible tokens (NFTs) of artwork by the former South African president and anti-apartheid hero are sold against the backdrop of a booming global digital art market.

My Robben Island consists of five vivid watercolors painted by Mandela after he stood down as president in 1999, plus The Motivation, a handwritten text that explains his visualization of the harsh island prison. All six works bear his signature.

In The Motivation, Mandela writes: “It is true that Robben Island was once a place of darkness, but out of that darkness has come a wonderful brightness, a light so powerful that it could not be hidden behind prison walls, held back behind prison bars or hemmed in by the surrounding sea… The most fantastic dreams can be achieved if we are prepared to endure life’s challenges. ”

She said: “When my dad was on the island, he was surrounded by gray. Remember, he was sentenced to life imprisonment. He never thought he would walk out of prison. But the paintings say we should never despair. ”

Offering the artworks as NFTs was a way of reaching new audiences, she added. “My dad was all about creating an accessible society. This is a way of democratizing his art. ”

Giles Peppiatt, the director of modern and contemporary African art at Bonhams, which is selling the NFTs, said digital art reached “new audiences that probably do not go to art galleries and museums”. “These are people who live a lot of their lives through their phones, through the internet, and who have large amounts of money at their disposal – and they are collectors. They are becoming a more and more important part of the art market, ”he said.

Sales of NFTs have rocketed in the past couple of years, fuelled by young buyers who have made fortunes from cryptocurrencies and other technologies. An NFT titled Everydays: the First 5,000 Days by Mike Winkelmann, the digital artist known as Beeple, sold for a record $ 69m last March.

My Robben Island will be offered by Bonhams on the Nifty Gateway platform in a six-hour period on March 9 at a fixed price of $ 3,495 for the edition, or $ 699 for an individual work. There is no set number for sale, although there is an upper limit of 10,000. “However many are sold in that six-hour window: is: the edition, ”said Peppiatt.

The watercolors, painted in 2002 as a therapeutic activity under the guidance of the art teacher Varenka Paschke, were “very good, rather sad and poignant. You could not get more personal images, ”Peppiatt said.

The Cell shows the interior of the space Mandela occupied during his Robben Island years. It has become a place of pilgrimage whose visitors have included Barack Obama and Bill Clinton. Mandela’s meagre possessions are piled beneath the window.

The Window depicts the outline of Table Mountain, seen through vivid orange bars. The Harbor was the first sight of the prison experienced by new inmates as they arrived by boat. The Lighthouse and The Church – prisoners were barred from entry – were island landmarks.

“Robben Island is a place where courage endured in the face of endless hardship, a place where people kept on believing when it seemed their dreams were hopeless,” Mandela wrote in The Motivation.

Makaziwe Mandela said she hoped some of the money raised by the NFT sale would help pay for a memorial garden being created at Qunu, where her father is buried. “Hopefully we will be able to finish the garden before I close my eyes,” she said.