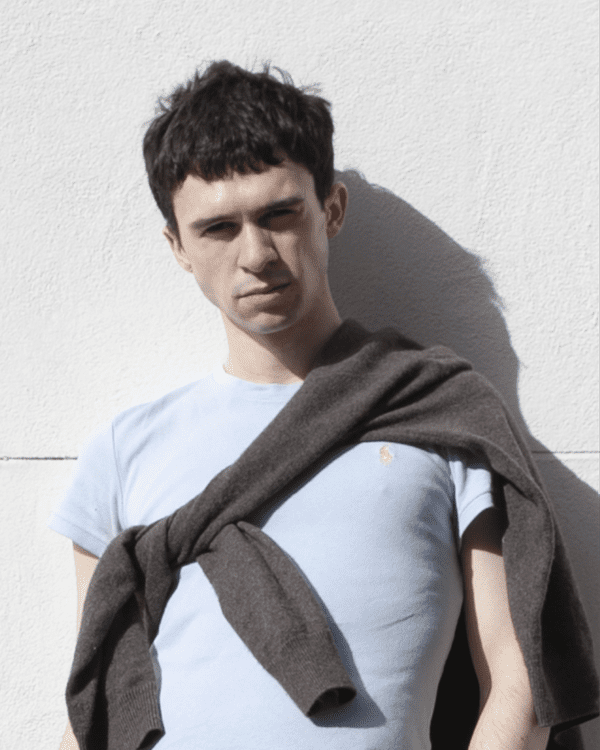 Fashion week is emerging from the Covid pandemic with a new look as a generation for whom upcycling is the new normal have graduated to center stage: dressing up is back after two years of fashion tumbleweed, but the rules have changed.

For 25-year-old fashion designer Conner Ives, ideas that spark his vintage-meets-streetwear cocktail dresses begin not in a sketchbook but in the Sheffield warehouse where he combs through old T-shirts looking for gems he can cut up and splice together into party looks.

“We spend hours picking through piles of T-shirts, and what we make depends on what we find that day.” On other days, Ives wakes up to 50 photos of vintage piano shawls, sent via WhatsApp messages from a dealer in Pakistan, from which he chooses the most interesting pieces to rework.

“I want to deconstruct the idea that secondhand is somehow secondbest,” Ives said during a preview in his studio. “Personally, I always prefer a vintage T-shirt to a new one – it’s so much more romantic.” Secondhand clothes make up 75% of his raw materials, and the brand’s swing tags bear the motto “Things of Quality Have No Fear of Time”.

Ives was headhunted by Rihanna to join her design team while still a student at Central St Martins, and already has a dress on show at the Metropolitan Museum of Art’s Costume Exhibit in New York.

But after two years of restrictions, his show on the opening day of London fashion week, in what was once Selfridges’ car park, was his first ever experience of the catwalk. In the 26-piece collection, a Paris tourist-stand T-shirt became an hourglass minidress, its curves tailored to the iconic outline of a glittering Eiffel Tower. Two gray marl sports team T-shirts were combined into a long column dress with a macramé fringed skirt.

“Lateral design is a promising business model, because there are so many clothes in the world already,” says Ives. But using found objects presents a challenge to production. While customers can request a color scheme when an order is placed, each of the dresses patchworked from old T-shirts or sewn from vintage piano shawls is unique. “It’s a different way of doing things, and the only way to figure out if we can scale this business is to try,” the designer said.

One of London fashion week’s biggest moments will take place simultaneously on a catwalk at Tate Britain and in the metaverse.

The fluid silhouettes and painterly colors of the Roksanda brand, whose sophisticated dresses have a loyal following among an art world clientele and on the red carpet, are far from an obvious fit with the metaverse, where the aesthetic is led by gaming and so far tends toward cyborg metallics and animal fantasia.

In a link-up that reflects how seriously the fashion establishment is now taking the metaverse, designer Roksanda Ilincic has partnered with the Institute of Digital Fashion to create an NFT dress that will go on sale in a range of formats ranging from £ 25 for one of 500 3D renders, to £ 5,000 for one of 10 3D animation renders with software files that allow an avatar to wear the dress in the metaverse.

“For me, the beauty of the metaverse is that anything is possible,” says Ilincic. “A dress that changes color, or disappears and reappears – if you can imagine it, then you can make it.”

She feels that resistance to the metaverse is likely to be futile. “I look at my daughter and I see can see that: [digital] is clearly where her generation is headed. The metaverse feels a bit like how it was when e-commerce first started and the luxury industry did not want to know – and look how that turned out. ”

However, the designer admits she was taken aback by the complexities of producing the digital version of a dress that will feature at her show at the Tate gallery. “I thought you would just press a button for whatever you wanted, but it’s much more complicated,” she laughs, adding that she hopes fashion can “infiltrate” the metaverse.

“Fashion has so much to offer. It brings with it not just glamor but a history of design and creativity which can make for a richer digital environment. I would hope that the metaverse can become a place where many different generations and groups of people can find beauty. ”

A week of 86 live shows feels like good news for most fashion week goers, but Caroline Rush of the British Fashion Council is most excited by the 61 events that remain digital, believing that a hybrid model is the best fit for a modern fashion industry.

“Designers are now really thoughtful about who they need to get into a room, and who they can speak to in other ways,” she said on Friday.

Young Londoners in the tracksuits they wear to the barber shop were the inspiration for a lyrical and elegant hybrid show by Saul Nash, a 29-year-old who is one of the country most promising fashion talents. Nash choreographed dancers wearing his clothes in a short film set in a Kensal Rise barber shop, then invited a small audience to watch a live performance of the routine.